Brief Report of the Commemoration of the United Nations International Day of Olders Persons (UN-IDOP) organized by the NGO Committee on Ageing (CoA), Vienna, 3 October 2022

The NGO Committee on Ageing, Vienna, organised the UN-IDOP Commemoration in the afternoon of October 3rd at the ÖJAB-Haus in Vienna. The event, which was co-sponsored by INPEA (International Network for the Prevention of Elder Abuse) was held in hybrid form, with the number of online participants in New York, Geneva, Tel Aviv and other places much larger than those physically present at the Vienna venue.

The opening speech was delivered by Johannes Rauch, Austria’s Minister of Social Affairs, in the form of a pre-recorded video presentation. He stressed the desire of his government to cooperate with civil society organisations like the Committee on Ageing in promoting the interests of older persons in society. His contribution was followed by one from Dr. Alexandre Sidorenko (Senior Advisor at the European Centre for Social Welfare Policy and Research, Vienna). His keynote speech focused on the topic “Mainstreaming Getting Older” and detailed the progress made since the UN General Assembly passed its resolution on the International Day of Older Persons in 1989. Dr. Monika Zavis (Associate Professor at the Comenius University in Bratislava) subsequently spoke about “Older Persons: Strengthening Resilience to Mental Health Issues”, stressing, inter alia, the role of spirituality in preserving body and soul in old age. These two in-person presentations were followed by a live video presentation from Brussels by Mr. Stecy Yghemonos (Executive Director Eurocarers). In his talk on the topic “Care and Caring in Europe: Common Challenges – Common Solutions?” he made clear that unpaid volunteers were still the backbone of most care for the elderly in much of Europe. Dr. Andrea Schmidt (Head of Department, Austrian National Public Health Institute) followed with an impressive scientifically documented presentation on “The Impact of Climate Change on Older Persons”. Finally, Dr. Monika Vana in a pre-recorded message from Brussels where she is a Member of the European Parliament for the Green Party, outlined what needs to be done to promote the interests of older persons so that no one is left behind.

The UN-IDOP event was concluded by a musical contribution from the trio TRI Colore. Afterwards, the audience was able to follow via zoom live streaming the parallel commemoration at UN Headquarters in New York. This was technically made possible by Susan Somers (INPEA) in New York and by Matthias Gritsch in Vienna who also made sure that the powerpoints of both online and on site speakers were uploaded on the large video-screen at the ÖJAB-Haus. He also enabled the zoom participants worldwide to ask questions which the moderator of the event in Vienna, Dr. Shantu Watt, then read to the speakers in the ÖJAB-Haus. At the end, the Chair of CoA thanked all those who made this hybrid commemoration organisationally possible, including Tijana Maksimovic from the ÖJAB-Haus which provided the venue. The original program is available below. 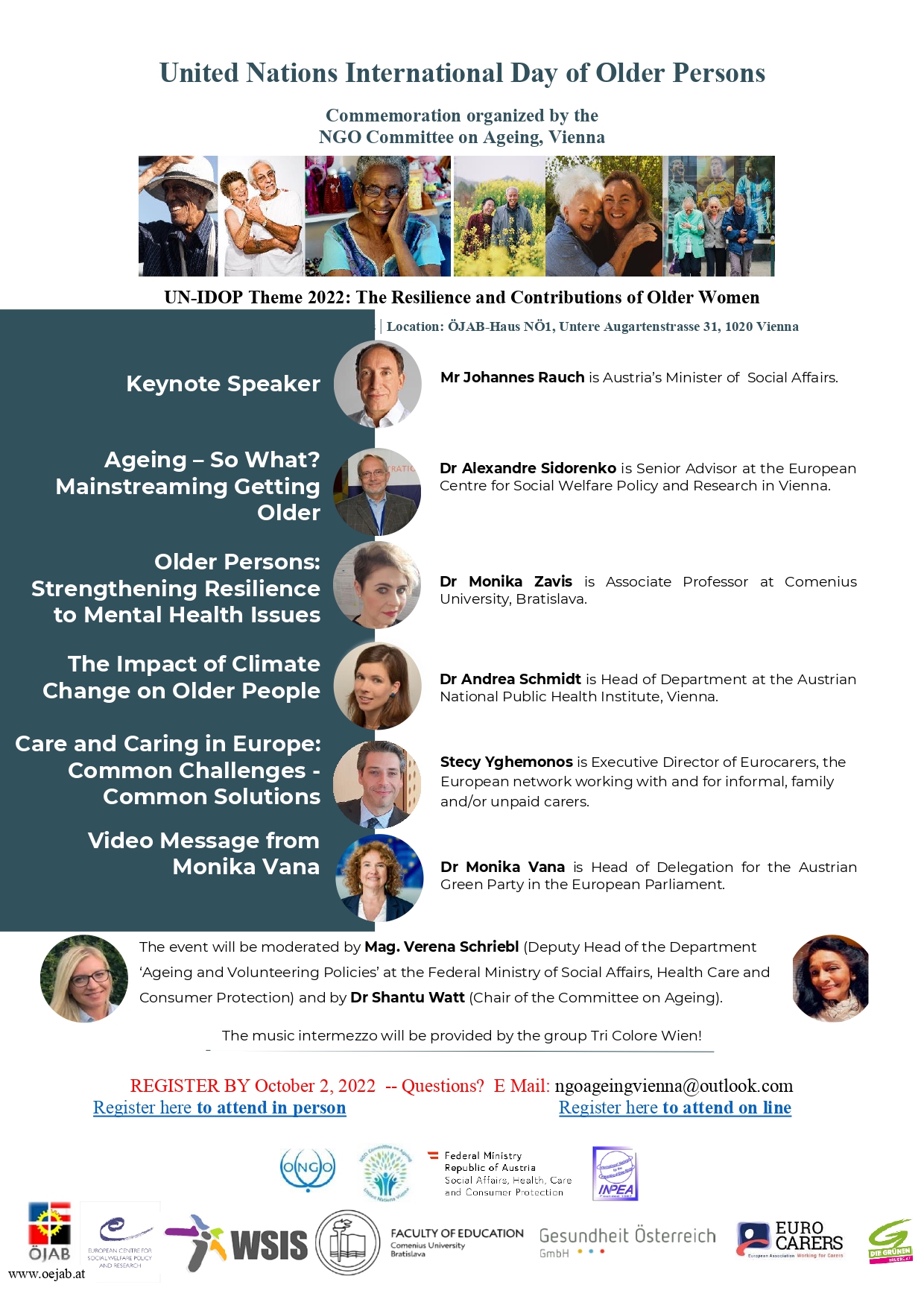